A soldier who returned to Shrewsbury in 1802 during the Peace of Amiens, after more than a decade away fighting, is reported to have stood on the walls of Shrewsbury Castle and observed “three noble institutions – The Gaol, the Canal Port and the Manufactory, each in their way serviceable to mankind, and all perfected during the war”. Each of these ‘noble institutions’ was located in Castlefields and Ditherington.

The area is famous for the first iron-framed building in the world – The Ditherington (now Shrewsbury) Flaxmill- Maltings – which was the technical forerunner of the modern skyscraper. A second iron-framed Flaxmill even bigger than the Ditherington Flaxmill was built in Castlefields just a few years later.There was also a canal and prison that has only recently closed.The last public hanging took place in 1868. Another important landmark is the first pre-stressed post-tensioned concrete cantilever bridge in the country, which crosses the River Severn just above the weir.

There are exotic road names such as Sultan Road named after the Sultan Inn, which commemorated a visit by a Sultan of currently unknown origin in the 1870s. The Comet Inn, now the Coach, was named after a particularly speedy ‘coach and four’ (the four refers to the number of horses) service to London. A small local park is unusually known as ‘The Pleasure’ to distinguish it from horticultural, agricultural, industrial or commercial land.

The Castlefields housing ‘vernacular’ is characterized by very short terraces constructed by local building firms, each with a distinctive style giving rise to a fantastic variety of frontages and roof lines. A special feature of Ditherington is the town’s very first council estate built in 1914 to a ‘garden city’ design.

And there’s plenty more to discover as you will find through Walking Past……. 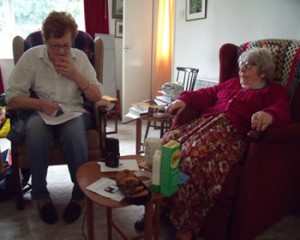 This website is dedicated to Peggy Gibbons, a remarkable local historian, now in her eighties, who spent her youth and later life in the area.

Besides recording her own experiences, she has tirelessly accumulated a vast array of local knowledge from archive sources and personal contact with local residents and other local historians.

Over the years, she has mounted a number of photographic exhibitions and given illustrated talks. She generously shares her knowledge and experience with anyone who asks.

It is with great pleasure and gratitude that the Walking Past project has incorporated some excerpts from over 10 hours of recordings of her in our self-guided walks. These recordings display not only her knowledge and research findings but also her humour and wisdom.

The full recordings (each with a written synopsis), and those of others featured in the walks are lodged with Shropshire Archives.